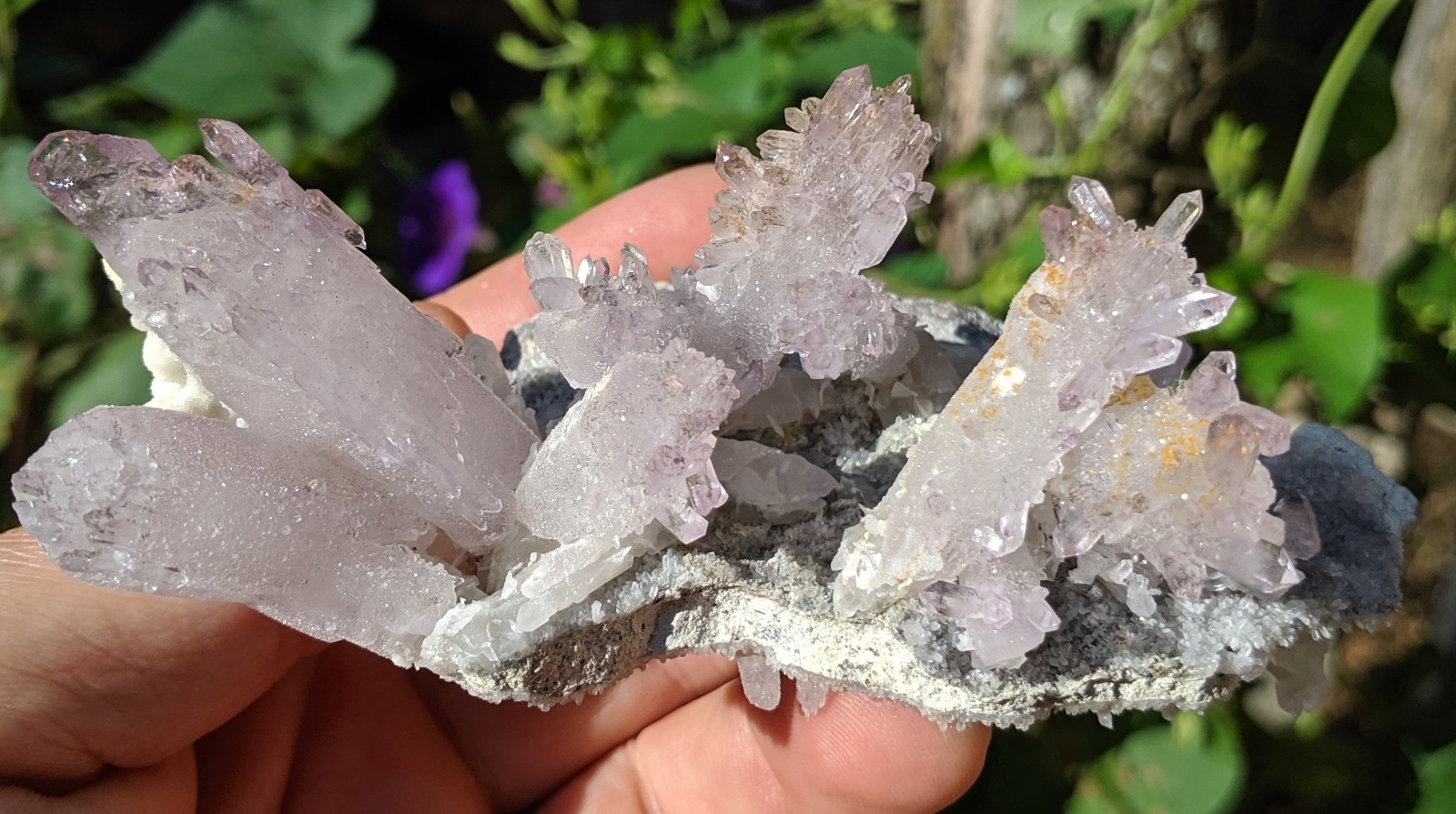 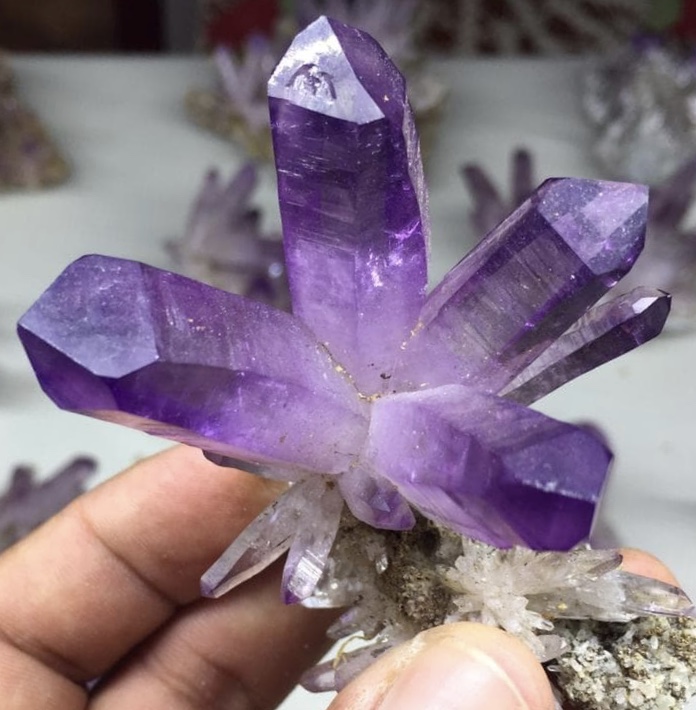 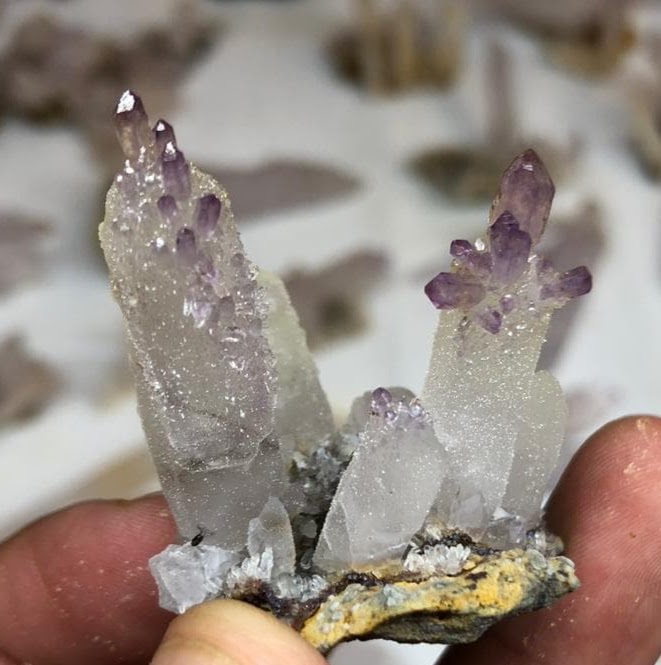 For the last 2 years we have been selling wholesale Amethyst and Andradite (Demantoid and topazolite) garnets from Peidra Parada, Veracruz State, Mexico. This classic amethyst locality produces some of the finest, unique forms of lustrous amethyst crystals. These crystals are formed in vesicular andesite, volcanic vugs with amethyst quartz, calcite, epidote, and various zeolites.

These crystal formations continue to amaze us with a variety of formations. Some clusters sit on the andesite host rock with a calcite, epidote, chlorite, or white zeolite at the crystal base. Other pockets will produce contact free clusters of long slender crystals. Often the crystals will exhibit scepter formations. but we also see skeletal quartz, often with water and other inclusions. We have been thoroughly enjoying the variables that nature produces in this region.

Then in March, some miners contacted us about a mine they had been digging some 10 miles away from the center of the Amethyst mining activity. Apparently the owner’s grandfather had begun this dig many years earlier and found the material ugly, thus closing it up. At the time, he had found the long white skeletal crystals with very little color. This time, the miners were excited. They told us that they had found “Cactus Quartz” referring to the  material mined in the Broekenboutshoek area of South Africa. We looked at his pictures and saw a unique and exciting material. We told them it was not “cactus Quartz” but since the dominant cactus of this area in Mexico is the Cholla we told them they found Cholla quartz of Veracruz. 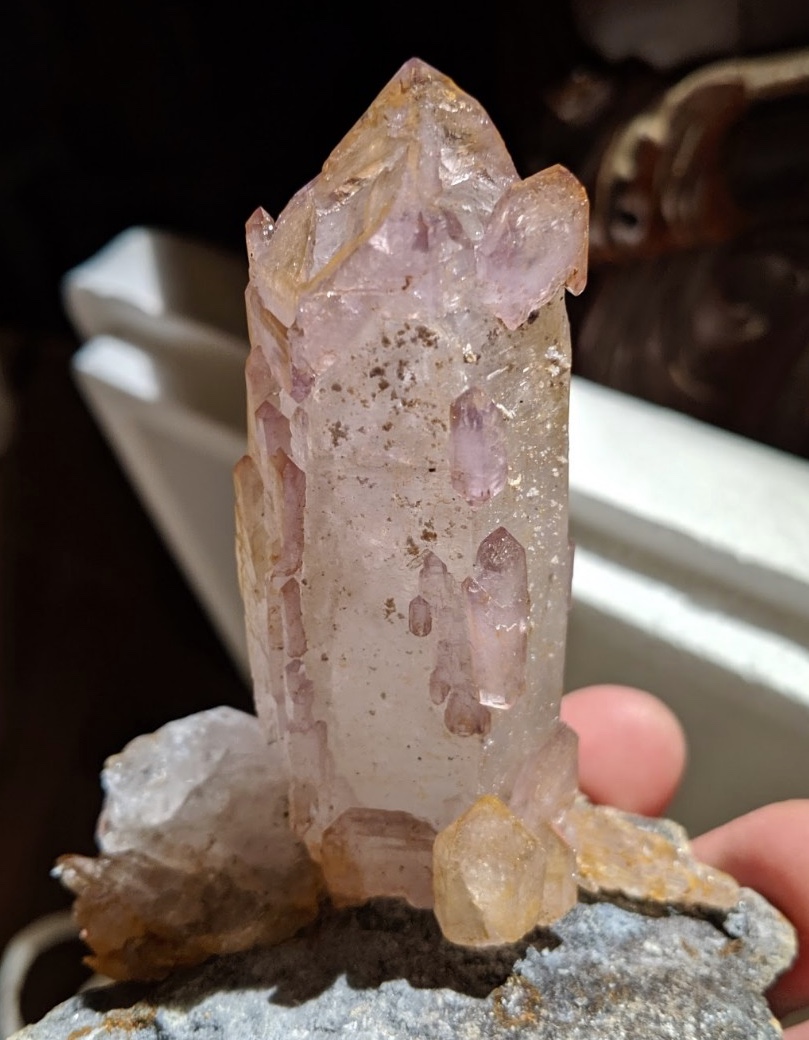 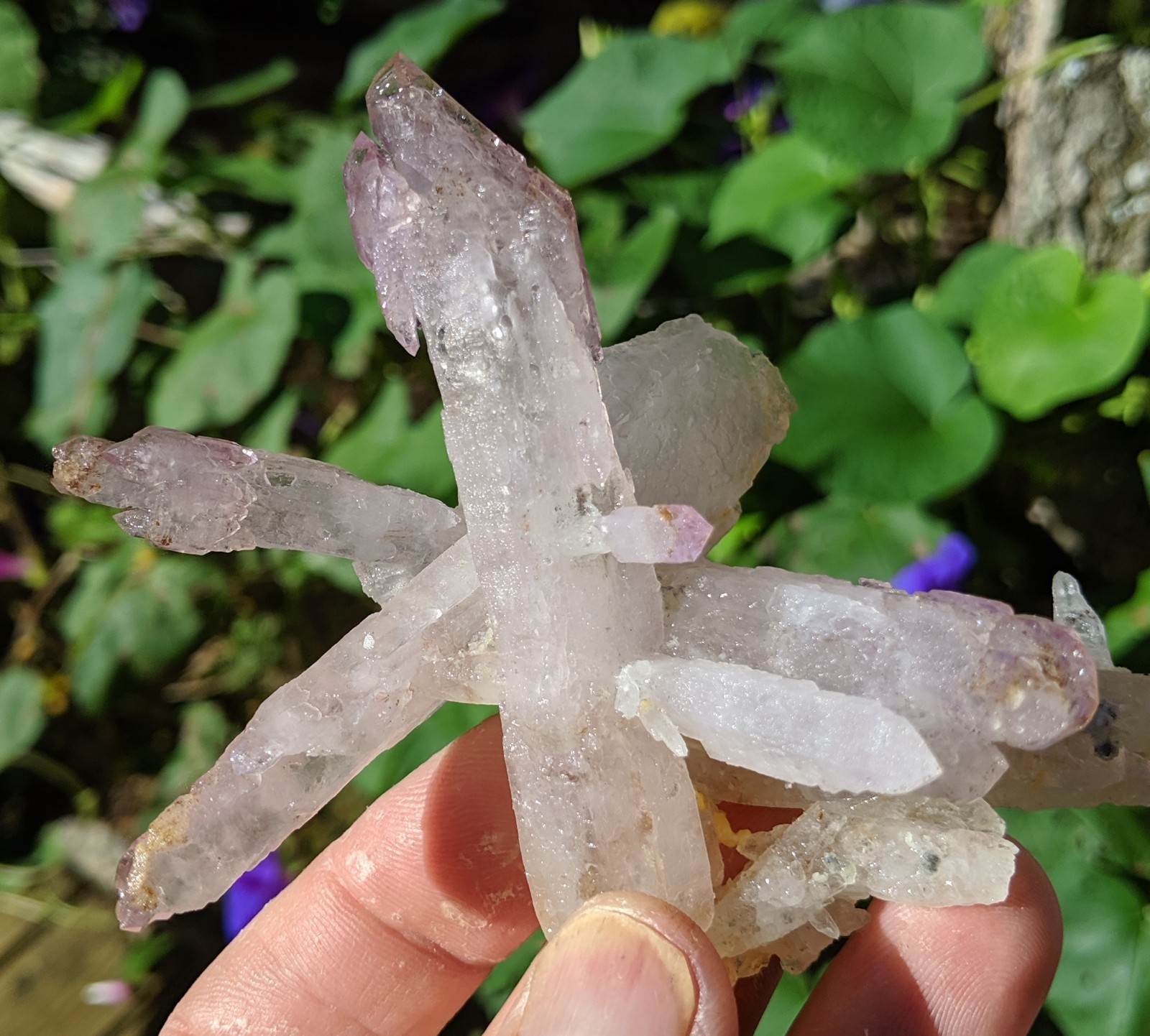 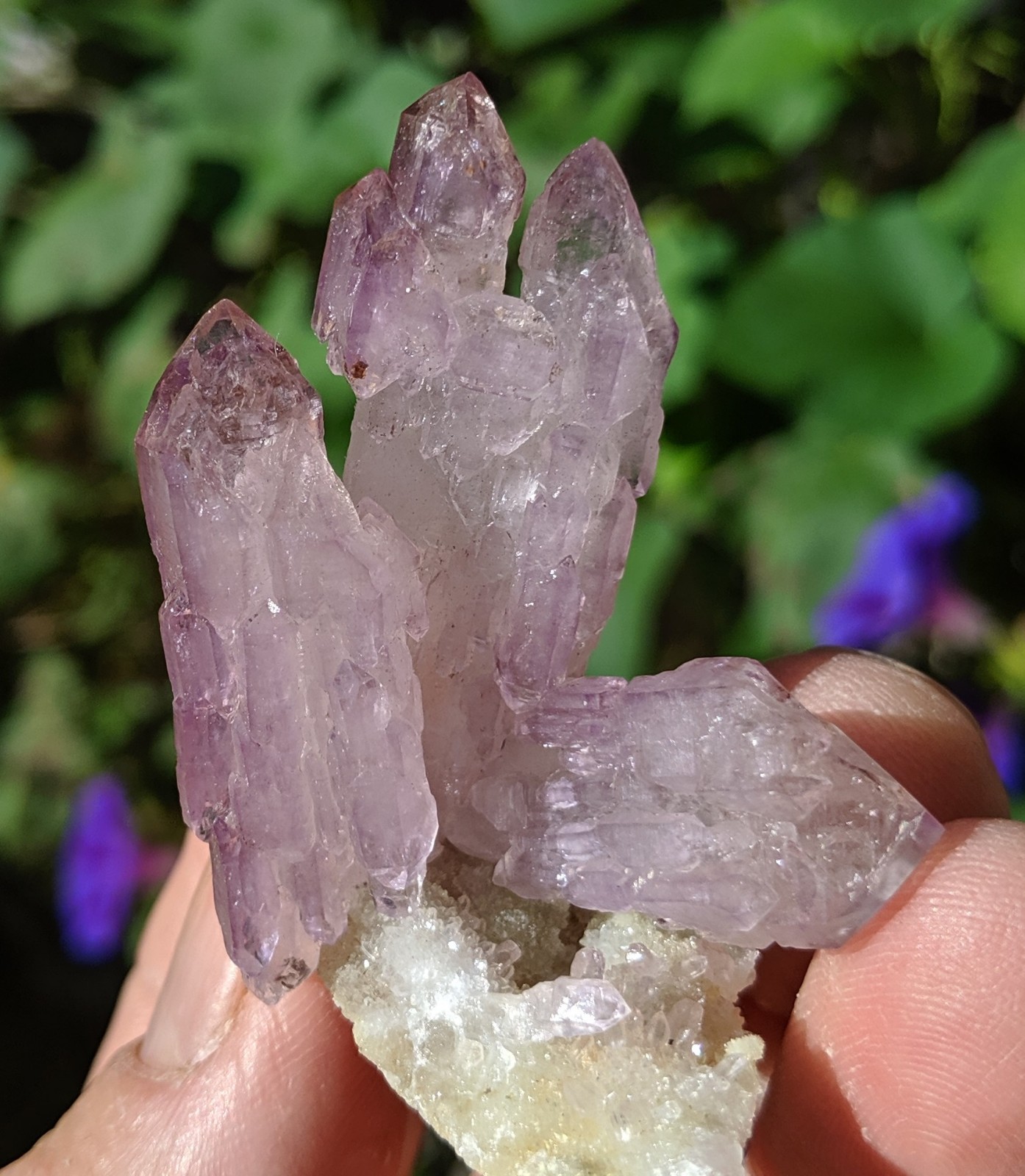 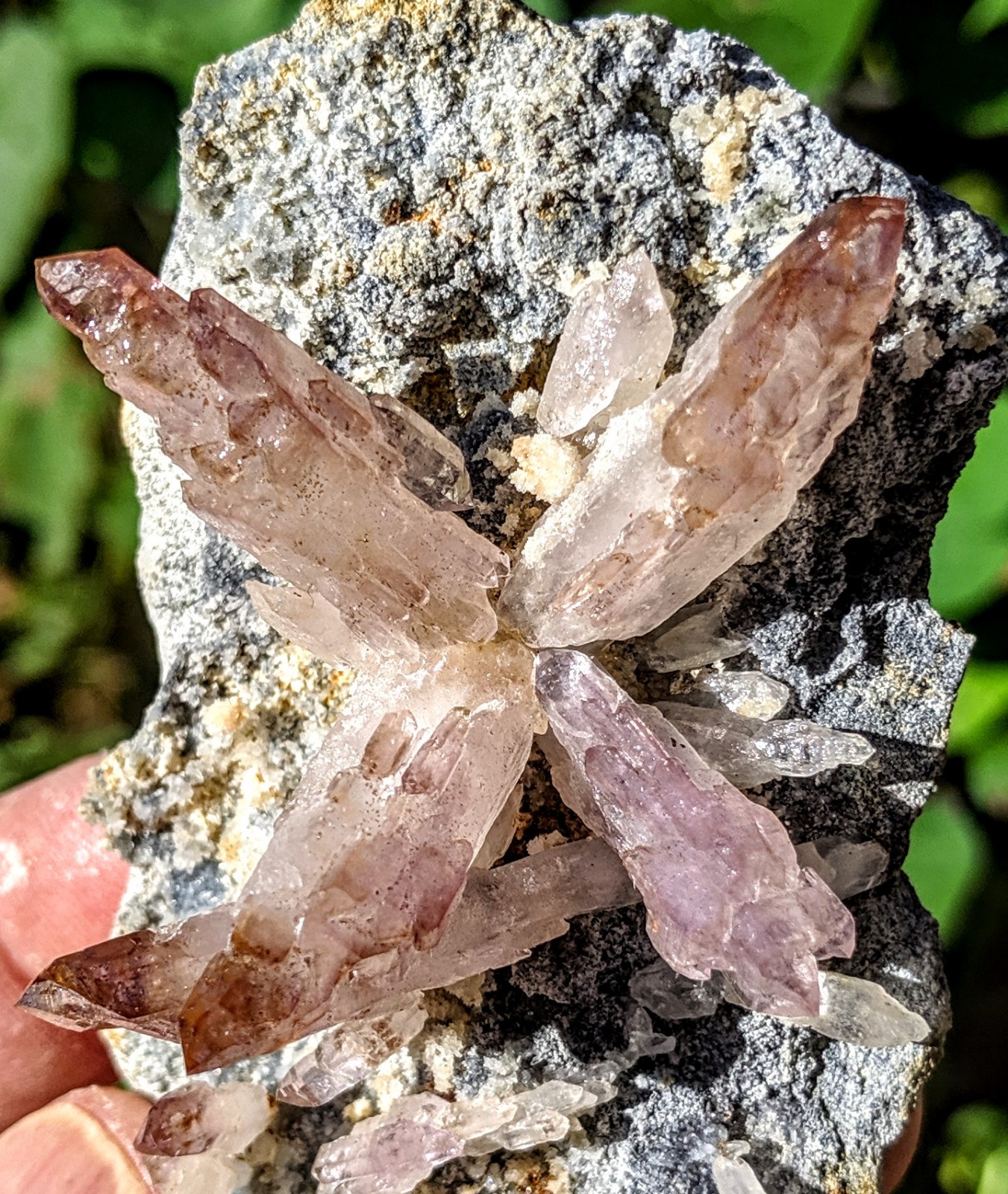 The new material they sent me was incredible.  The quartz ranges from white and foggy to a dark amethyst in color. Some of the crystals are a fast growth skeletal and hoppered formation. These form with numerous scepters and multi-directional “sprouting” clusters. The other types are coated with a druzy brilliant quartz topped with small secondary amethyst points near the tips of the primary points. While others still in the same pockets formed an “artichoke quartz” growth.  Many of the crystals are found with a thick iron stain, but due to the secondary growth, some of the iron is included in the quartz leaving an ametrine like effect.  We cleaned what we could, with the time we had, and took them to the Denver show. People were impressed, sales were solid, but most importantly no one claimed to have seen similar material.

Soon after Denver we headed to Mexico to visit the mine. 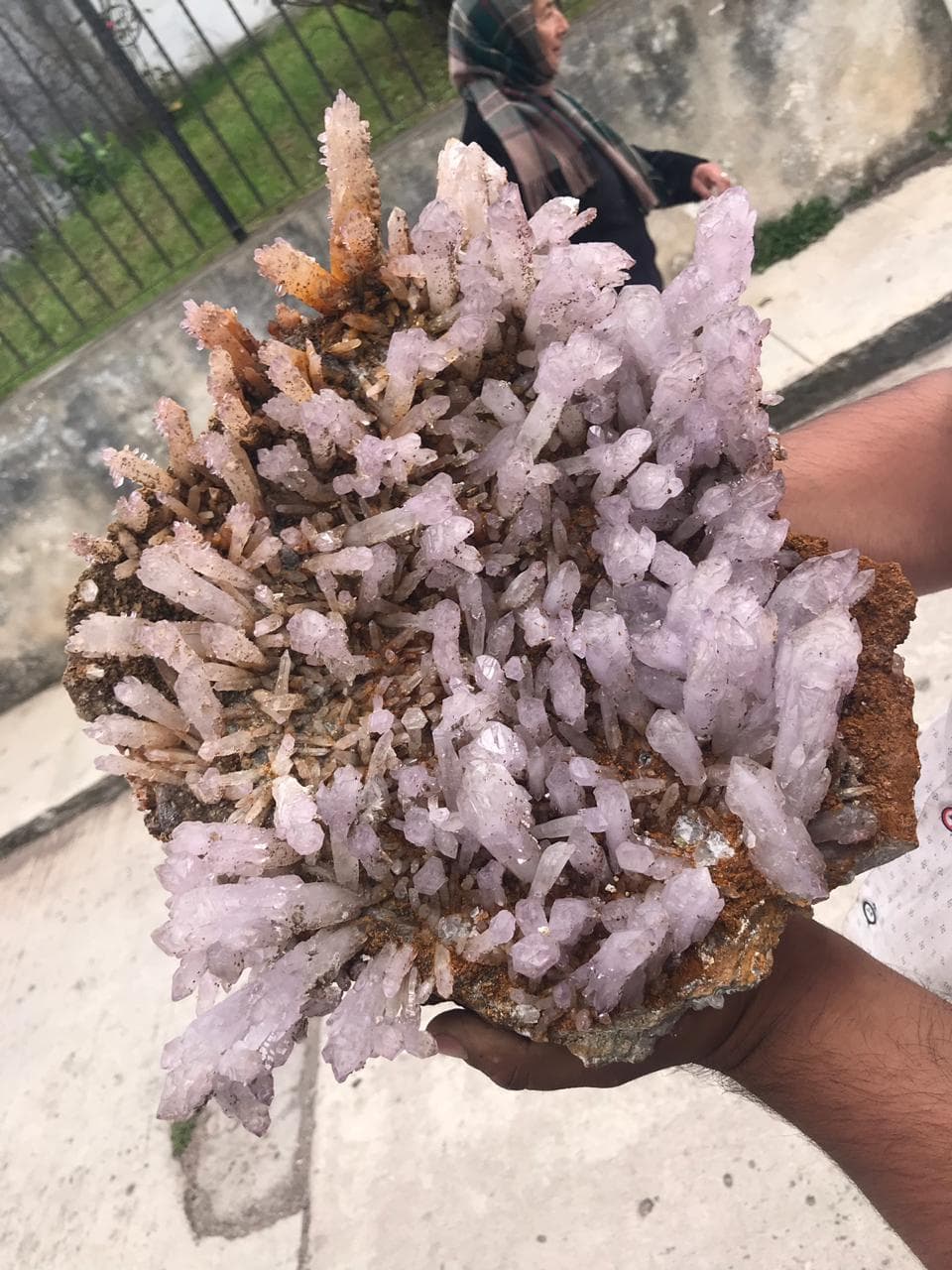 I brought Kiel Stroupe along with me. He has been importing the majority of the Holloysite included quartz from Columbia, and I thought he could offer me another good set of eyes.

We met my middleman, Juan and his father(our driver) and started our journey from a bustling Mexico City to the sleepy southern town of Las Vigas. On the way we passed active volcanoes, farming valleys and cactus covered hillsides.
Upon reaching Las Vigas we proceeded to the mine brokers’ house. We were welcomed into this family’s household and eventually led into a room full of tables of neatly displayed “lots” of crystals. 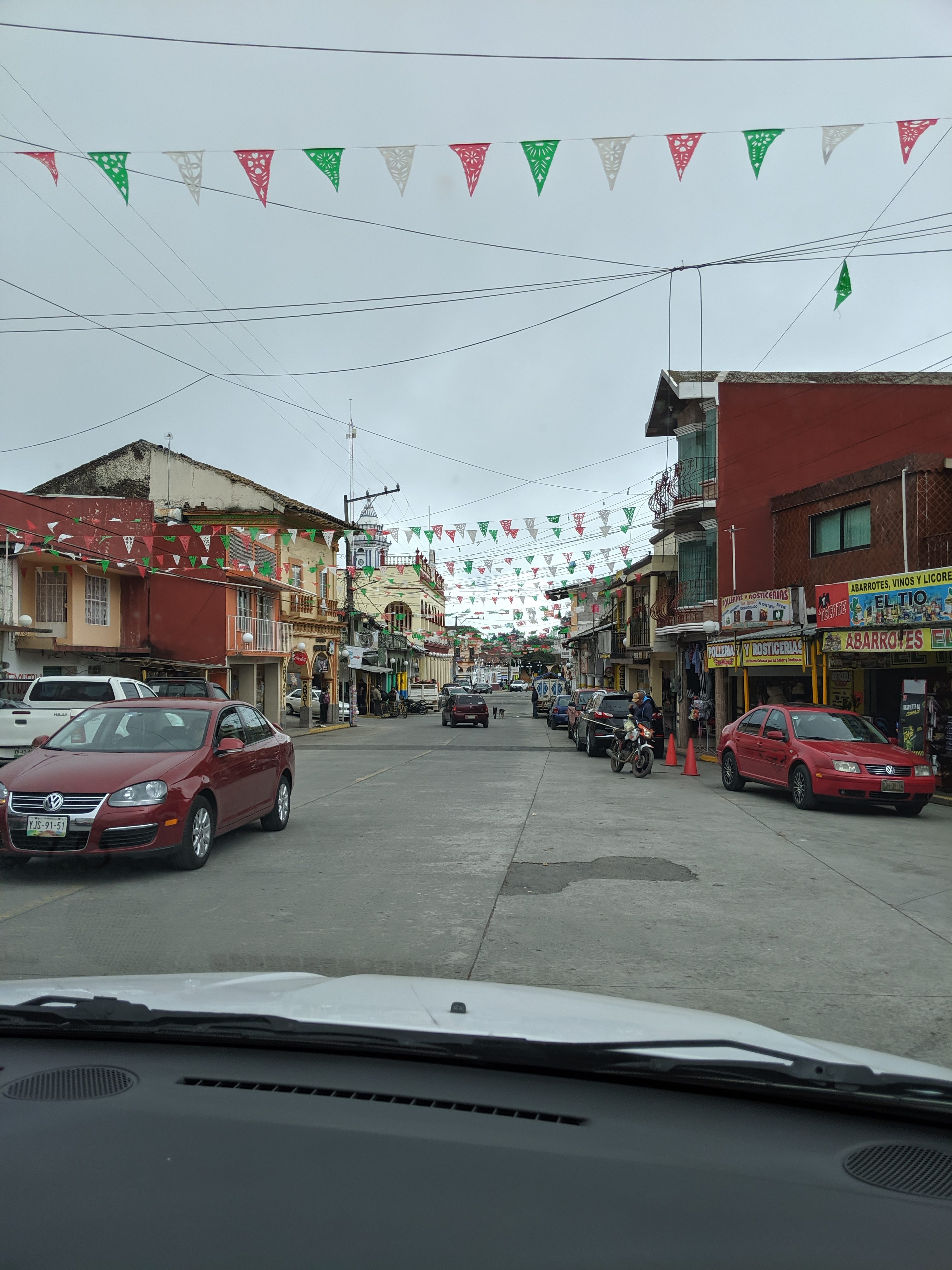 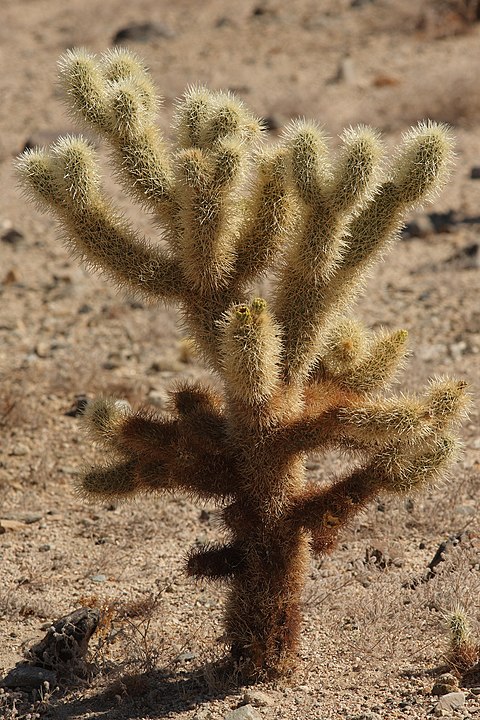 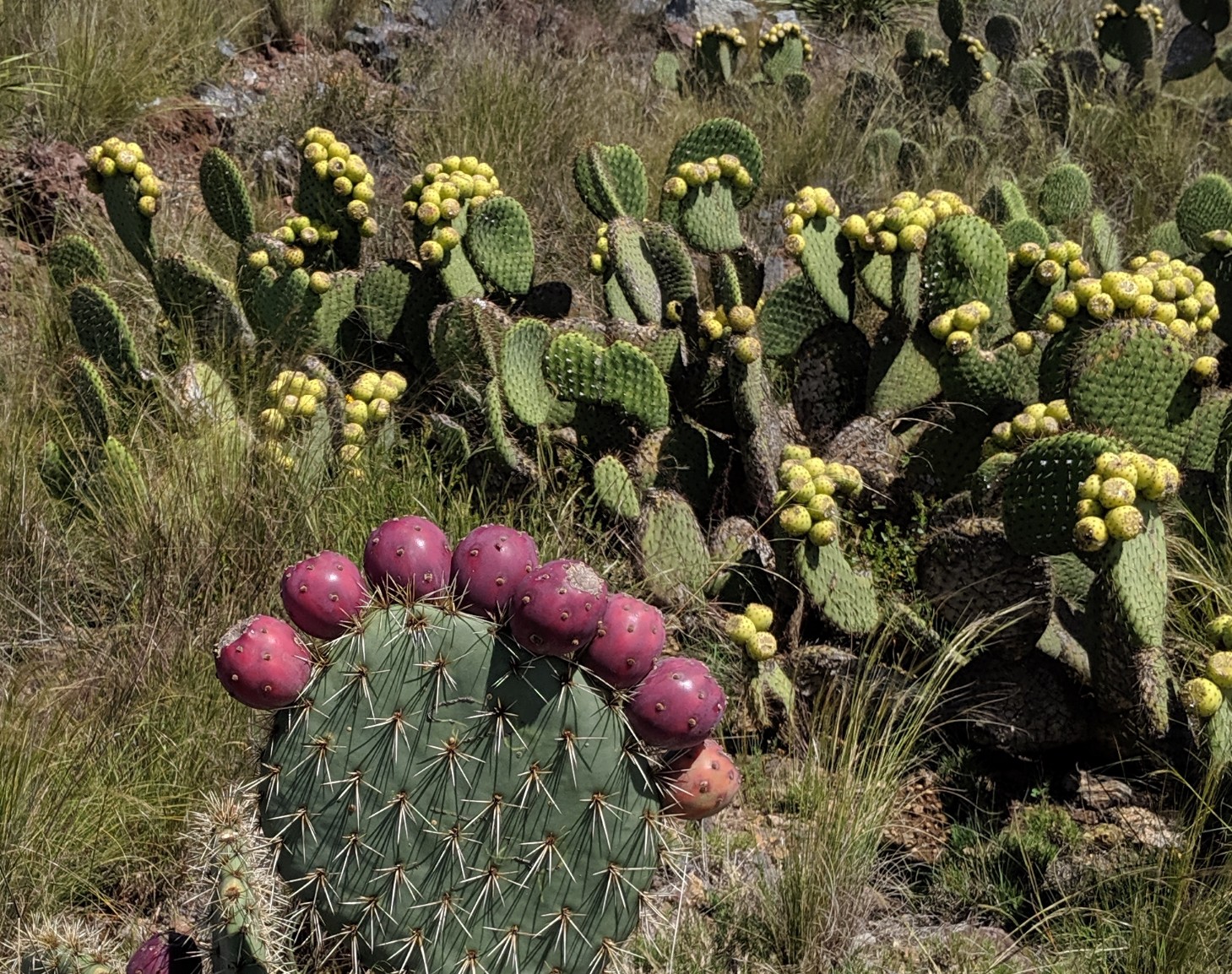 Our goal was to head up to the new mine, meet the owner and miners and secure our mutually beneficial relationship. The weather in this sub-tropical climate had changed. It was abnormally cold and very rainy. The concern was making it up the mountain roads in the mud without sliding off a cliff. After a couple of days it became apparent that was not going to happen.  We had to skip out of town as we seemed to have drawn too much attention to ourselves, which in a state with much corruption worried our hosts. They insisted in us driving to Mexico City without stopping to eat.

With a slight regret of not visiting and digging in the mine, we were primarily satisfied with our trip. It had been successful for business and we had made many new friends. The people of this area are wonderful warm hearted beings. I can’t wait to return.

Until then we will be cleaning Cholla Quartz, classic Veracruz and garnets, and preparing for a terrific Tucson 2020. We’ll be displaying in the 22nd street show with a couple of satellite locations elsewhere in the show. See you there! 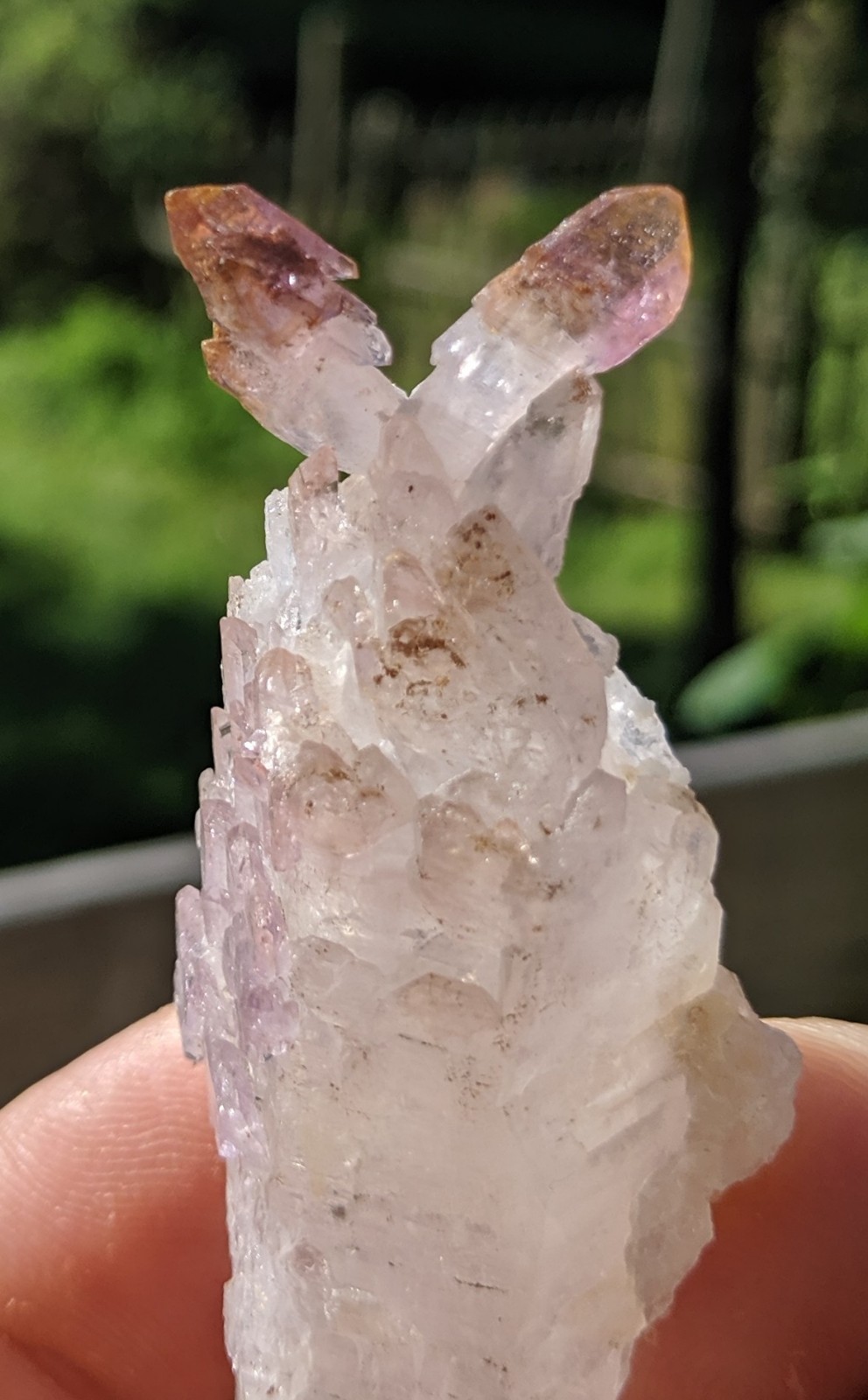